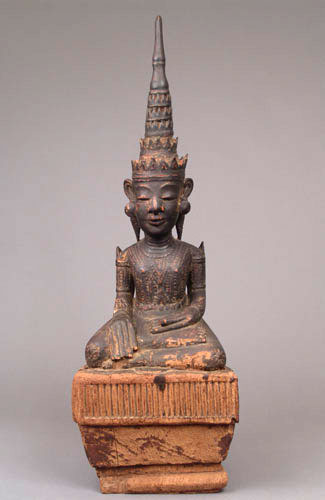 The Buddha shown here is a fairly common example of a Mon image from the south of Burma. This particular type appeared around the seventeenth century, and the Denison example probably dates from the late seventeenth or early eighteenth centuries. Usually made of wood, Mon images are usually depicted seated in the Earth-touching posture. Physically, the Mon Buddhas have a geometric quality, with the head proportionally large compared to the body, thick legs, thin arms, and a compact torso. Facial features are often pinched looking. Mon Buddhas are usually crowned and adorned, and the Denison example is no exception. It has a five-tiered crown, ear plugs, necklaces, chest ornaments, epaulets, and bracelets. The knee caps are decorated with a floral pattern, similar to the lotus flower.