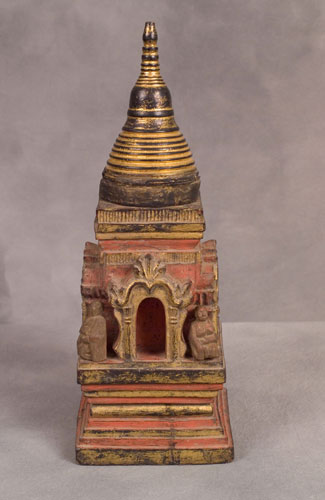 Buddhist reliquary used in worship. This miniature stupa consists of a bell-shaped superstructure, which is resting on a rectangular pedestal base with four arched niches. These niches, now empty, may have once contained images, probably miniature Buddha’s. The monk figures at the four corners are later additions which may reflect Chinese influence.

The stupa (known as a zedi in Burmese) is an ancient type of Buddhist monument which is believed to have developed in India from the shape of a prehistoric burial mound. In its most basic form, the stupa consists of a hemispherical mound of stone or brick which is set on a plinth or terrace. Stupas usually enshrine a holy relic, often purported to be connected to the historical Buddha. For this reason, the stupa is regarded as a symbol of the Buddha's death and His attainment of Nirvana (Sanskrit) or Nibbana (Pali), the ultimate goal in Buddhism. The most famous and revered stupa in Burma is Rangoon's Shwedagon, which is believed to enshrine several hair-relics of the Buddha.

In Buddhist Southeast Asia, artisans have created miniature versions or models of the stupa in stone, in precious metals, or in wood since very early times. Since then, the miniature stupa form has continued to be popular in Burma, and examples can be found in all periods of Burmese history, from the Pagan period

(11th - 13th centuries), down to the present. Stylistically, the miniature stupa in the NIU Burma Collection appears to date from the colonial period (late 19th - early 20th century).

Miniature stupas have various uses such as objects of devotion on the altars at home, roadside, and village shrines. Buddhist devotees may use miniature stupas as votive offerings, which they place in or near a major stupa or other shrine to show their devotion and to earn merit. In addition, examples have been found in the deposit boxes or relic chambers of full-scale stupas.