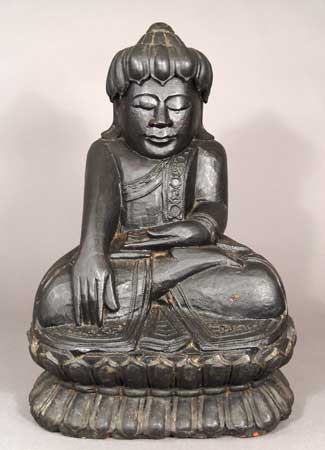 Dekkhina Thakkha images are uniquely Burmese. The main iconographic features of these Buddhas are a lotus flower on the head, a lotus pond carved on the underside of the throne, and nine dots on the body. The lotus flower indicates that the Buddha was protected from the sun during his meditations, while the lotus pond reflects the Buddha’s mental purity, the escape from suffering, and the universal nature of the Buddha’s teachings. Lotus plants grow up from the mud of a pond bottom through the murky water to blossom pure-white in the air. They represent the path to enlightenment because they remain untainted by the dirt around them. Likewise, Buddhas have managed to remain pure despite being surround by the sin and ugliness of the world. The nine dots on the body of the Dekkhina Thakkha - one between the eyes and one on each of the shoulders, wrists, knees, and hips - are points where gold or silver nails have been inserted. The nails were once pieces of metal engraved with sacred texts. This type of Buddha image is believed to have protective qualities against fire and to have the ability to bring wealth. As a result, people place them on their home altars.