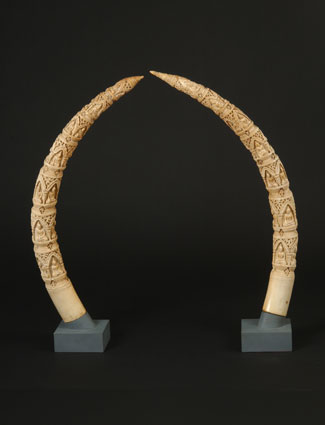 Elephant Tusks with carvings of the Twenty-Eight Previous Buddhas

In Burmese temples, generous donors sometimes offered elaborately carved ivory tusks to be placed on either side of a central Buddha image. The fine pair of carved tusks in the NIU Burma collection represents the Twenty-eight Buddhas from the past: iconography widely popular amongst the Burmese since the Pagan period. For each of these predecessors of the historical Buddha so created, the donor would receive additional merit.

The annually-performed ritual of the Twenty-eight Buddhas is also illustrated in early wall paintings and in stone relief, and in wood and bronze sculptures; as well as by ivory carvings like these.