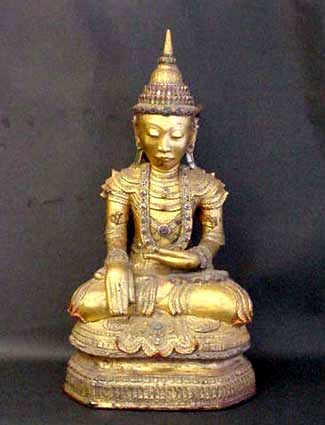 Buddha in Bhumisparsa mudra (gesture of calling the earth to witness)

Lacquer with gilding and inlays

According to accepted Theravada Buddhist practice, images of Gautama Buddha appear clothed in unadorned monks’ robes with the hair in small curls and the body devoid of jewelry. The continuity of this visual convention is emblematic of the Buddha’s renunciation of this world of desire and is a reminder of his having sacrificed his material heritage as a crown prince.

In marked contrast to this strong tradition, there is a cultist convention which depicts the Buddha in lavish royal attire. One possible explanation for this convention derives from a meeting of the Buddha with King Jambupati. The Buddha requested that Jambupati forsake evil and practice kindness, but Jambupati was not moved. Realizing the king’s total reluctance, the Buddha magically appeared in resplendent royal raiment that so awed Jambupati that he accepted the Buddhist precepts. In Southeast Asian countries like in the former Burmese Kingdom, where rulers have very high if not semi-divine status, tales of this type justify the need for the king to worship the Buddha, the King of Kings.