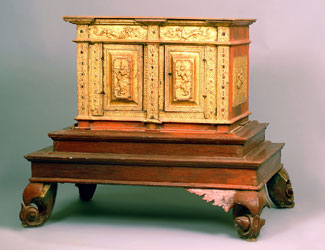 Such a chest, found ordinarily in monasteries, is used to store manuscripts. The stand, the top, the bottom and parts of the sides are decorated in plain red lacquer while the front panels and the rectangual side medallions are covered with relief work, thayo, which has been gilded and inlaid.

But this particular chest is unusual for its decoration. On the doors, two figures are facing each other, each bearing a weapon. Above, two protective mythical animals (judging from the floral motifs emerging from their mouths) face each other as well. Similarly, both side medallions show pairs of opposed flying figures.