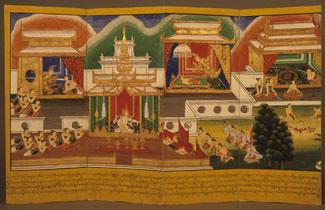 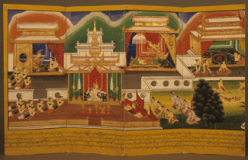 Ink and watercolor on paper

In the Temiya Jataka, the Buddha-to-be is born as a prince. He sees his father order the execution of several criminals and remembers that as king in a past life he also gave such commands and spent 80,000 years in hell as a result. He resolves not to inherit the kingdom from his father and pretends for sixteen years to be dumb and incapable. He is subjected to multiple trials by the court in order to cure him but to no avail. His father finally orders a charioteer to take him away and kill him. Once outside the palace the prince emerges from his non-responsive state and preaches the Buddhist doctrine to the charioteer. The prince becomes an ascetic holy man, and the royal court pays him a visit. After hearing the Buddha-to-be preach, the entire court renounces worldly pleasures and embraces the Buddhist religion.