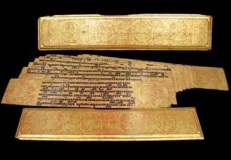 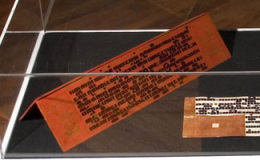 Kammawasa are elaborately decorated manuscripts extracted from the Pali Vinaya pitaka: the monastic code of discipline comprising one of the three parts of the Tripitaka, for use by the sangha for certain ceremonies, and generally read aloud at monastic assemblies. Topics ordinarily covered would include formalities for the ordination (upasampada) of monks and the bestowal of their robes, for the consecration of an ordination hall, for celebrating the festival of the full moon, etc.

Kammawasa may be inscribed on palm leaf, ivory, copper or even on pieces of discarded monks robes which have been lacquered to provide a rigid surface. The texts are usually composed in the large Burmese square script, known as “tamarind seed script.”

This fine example of a highly-decorated kammawasa within the NIU Burma Collection is on monks robe cloth. Its wooden binding boards are beautifully and finely ornamented with gold leaf and red lacquer, with figures of standing deities.

The Northern Illinois University Burma Collection conserves several other Kammawasa, inscribed on copper or ivory, all of which are held within the Rare Books and Special Collections, located on the fourth floor of the Founders Memorial Library at NIU.