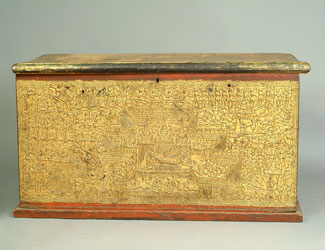 This traditional Burmese chest in teak wood was used in monasteries to store palm-leaf manuscripts. It is decorated in plain red lacquer at top and bottom while three of the four side panels are covered in thayo relief work and gilded. It depicts one of the celebrated episodes of the life of Buddha, the “Great Departure", when he abandons his palace, leaving behind his young wife and his newly born son Rahula.

In the Burmese tradition, the scene typically shows Prince Siddhartha taking a last look at his wife, still sleeping under a triple-spired palace, as can be seen in the middle of the central panel. A carriage on the upper right represents the young prince touring his kingdom and encountering three of the Four Omens —a sick man, a poor man, and a monk (the corpse is absent here)— a shock which will lead to his Renunciation. On the left side of the palace awaits his horse Chandaka (Kanthaka), which will bear him away from his palace: a decision unstoppable even by Mara. As displayed on the left side panel, alongside the river Anoma Siddartha takes leave of his horse, which soon dies of a broken heart. Then, surrounded by an army of devas in praise, he severs his long hair.