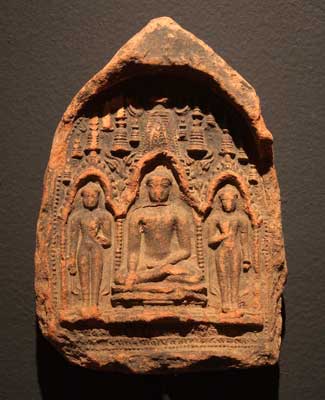 This reddish terracotta votive tablet shows the Buddha beneath a trefoil arch supported by two beaded pillars and surmounted by a sikhara and a stupa with streamers. Above the arch, leaves of the Boddhi tree emerge. The Buddha, sitting between two standing figures, is seated cross-legged on a double lotus throne. He places his left hand on his lap, while his right hand is in the bhumisparsamudra mudra, "calling the Earth Goddess to witness". Above are several small stupas.

Images of the Buddha with his hands in the gesture of bhumisparsamudra, flanked by a pair of standing attendants, are commonly found in Halin specifically, and this example probably dates from the tenth or early eleventh century. The Indian script corroborates an early date for this piece.