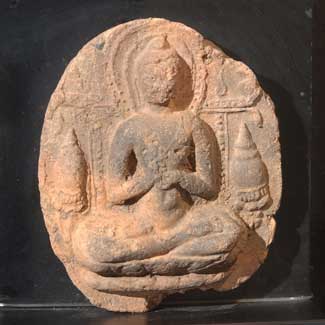 This oval votive tablet shows the Buddha with his head outlined by a double nimbus. Architectural motifs can be seen behind his shoulders.The Buddha is seated cross-legged on a double lotus throne. He holds his hands in the gesture of “turning the wheel of the law" (dharmacakra mudra), which represents his first sermon, and he is flanked here by two bulbous stupas. Images of the Buddha with his hands in dharmacakra mudra usually derive from the begining of the Pagan period, and this one may be dated to the early eleventh century.