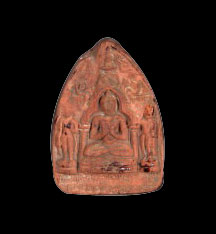 This reddish terracotta votive tablet shows the Buddha beneath a tre-foil arch supported by pillars and surmounted by a sikhara and a stupa with streamers. The Buddha is seated cross-legged on a double lotus throne. He holds his hands in the gesture of turning the wheel of the law (dharmacakra mudra) which represents his first sermon, and he is flanked by two standing figures. Images of the Buddha with his hands in dharmacakra mudra with two standing attendants are uncommon, and this one may date from the tenth or early eleventh century. The Indian script corroborates an early date for this piece.