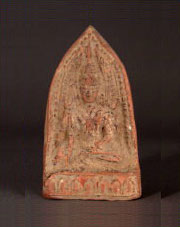 Acquired in the south of Burma at the end of the nineteenth century, this votive tablet displays similarities with Mon Buddha images. Here a single, crowned Buddha image is visible seated cross-legged in the gesture of calling the Earth Goddess to witness. He is surrounded by a beaded border and beneath him are seven pointed arches. The latter may indicate seven previous Buddhas. The main Buddha wears a high crown from which a finial extends, and extensive ribbons fill the space to the side of the crown. His chest is ornamented with necklaces and royal insignia.