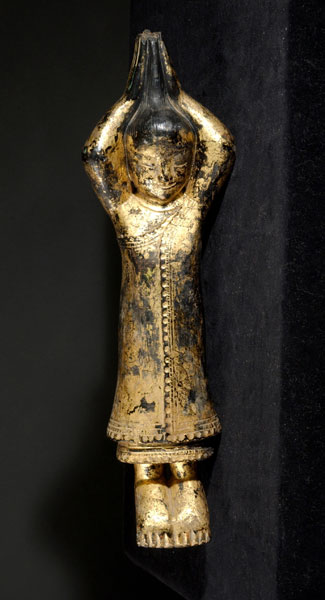 This is a commonly-seen figure of the monk Sumedha, an ascetic living at the time of the historical Buddha. He is usually depicted lying in front of a standing Buddha image, face towards the ground. This represents the the celebrated episode of Sumedha offering his body to the Buddha Dipankara to cross a muddy road. (Dipankara, is the first of the Twenty-eight Buddhas of the Past). This story is very popular in Burma since the Pagan period where it was well-represented in the wallpaintings.The NIU statuette of Sumedha is in wood, covered in black lacquer and gilded. He is holding both his long hair and his hands above his head to pay respect to the Future Buddha. Because the statue is always placed in a horizontal position at the foot of the Buddha, Sumedha's own two feet are vertically extended.