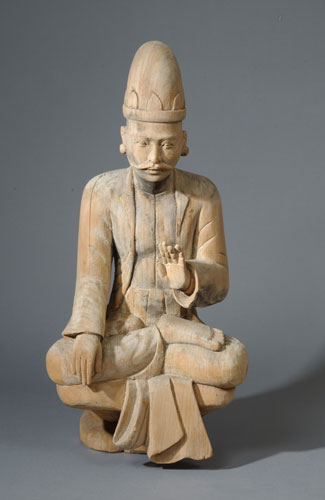 Wungyi (minister) seated in the attitude of a Buddha

Image in wood of a minister (wungyi in Burmese) seated as a Buddha touching the earth with his right hand and with his left hand raised in abhayamudra (fearless attitude). The very fine seated wungyi figure in the NIU collection represents the Buddha in one of his former lives, taken from the Jataka tale of Vidhura-Pandita.

According to this Jataka, the Buddha came to earth as Vidhura, a man of uncommon wisdom. He became a Wungyi, the highly esteemed chief minister to King Dhananjaya in the city of Indapatta. News of Vidhura’s eloquence and wisdom spread to the kingdoms on Earth, as well as to those above and even to the naga kingdoms below.

A naga queen, longing to hear the eloquent words of the sage, implored her husband to bring to her the heart of Vidhura. Unwilling to do the deed himself, the naga king offered the hand of his beautiful princess daughter in marriage to anyone who could produce Vidhura’s heart. The feared ogre, Punnaka, accepted the challenge.

The game ensued and Punnaka, using his magical powers, won the game, but he chose only one of the Dhananjaya’s possessions, the minister Vidhura as his prize. Vidhura then willingly went with Punnaka. After Punnaka’s repeated unsuccessful attempts to kill him, Vidhura then asked to sit and preach to Punnaka. Vidhura’s words so moved Punnaka that he could no longer find the will to kill the Wungyi. Punnaka then realized that in actuality Vidhura’s heart was his wisdom.

At Vidhura’s request, the ogre took him to the Naga underworld where Vidhura continued his eloquent preaching which effected the conversion of the entire Naga kingdom. This Jataka explains the curious dualism seen in this figure of the Buddha as Burmese Wungyi.