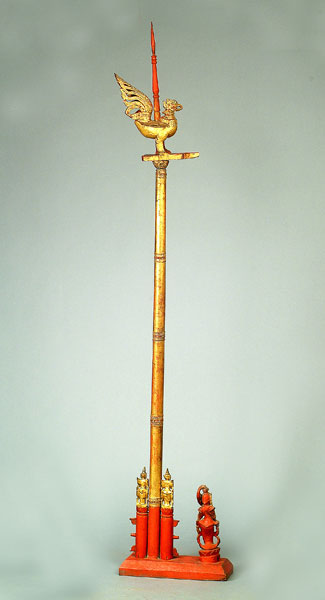 The gallery’s small tagundaing is a continuation of the ancient Indian practice of erecting monumental columns which symbolize the spread of the Buddhist faith. In Burma, these great Buddhist flagstaffs were raised in monastery compounds to celebrate the submission of local animistic gods to the triumphant Buddhist doctrine and law. Ranging anywhere from 60-80 feet in height, the tagundaings were usually surmounted by ornamental mythical animals such as the hintha bird, seen here atop the miniature tagundaing.

Frequently, the base of a large tagundaing is set between piles carved in the form of mythical Thadya Nats. Originating from animistic practices, Thadaya and Thadya-min Nats are benevolent, and sometimes mischievous, cloud-dwelling spirits believed by some to be the ancestors of the Burmese people. At the foot of the flagstaff is the Earth Goddess wringing her hair. She is quite commonly represented associated with the flagstaff on ancient manuscripts, on woven manuscript wrapping ribbon sasygyo as well as on the oldest tagundaing found in Pagan. Her placement there may indicate symbolically the recognition of her role in assisting the local Burmese population towards accepting Buddhism.