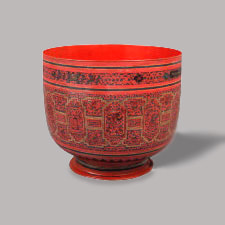 This footed, lacquer bowl is decorated with the Mount Meru design. Mount Meru is the sacred mountain of the Buddhist universe. The pattern consists of a chain of rectangles, connected with smaller squares, with redented corners. The central spaces created by the Meru design have been filled with signs of the Burmese zodiac, and mask-like figures are set into the upper and lower spaces between the central motifs. The name and location of the workshop where this piece was produced have been written on the bowl. The artist was Hsaya Htwa, who was well-known during the early twentieth century. The Moffats were in Burma during the 1950s in a diplomatic capacity.