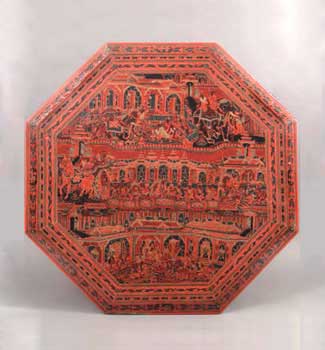 David Tin Hla was a Burmese citizen who graduated from Denison University in 1926, and he became the first Burmese to hold the position of general secretary for the YMCA. He maintained links with Denison after graduation, and his wife donated this table top in his memory. It is not known when this tabletop was converted into an object to be hung on a wall. The table top shows a palace scene with the king seated under a royal pavilion and surrounded by court attendants. Images such as this were popular in Burma.