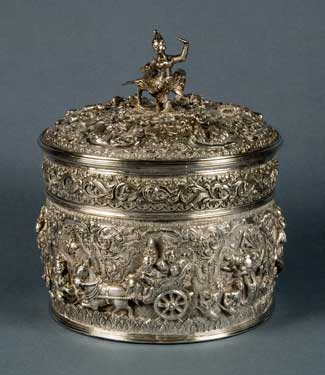 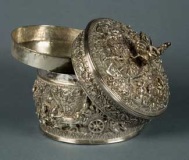 John Lacey and his wife collected this box when they were in Burma as diplomats in the late 1970s. They donated it to the Burma Foundation Group in 1997, intended for the Burma Collection at Northern Illinois University for facilitating the study there of Burmese art.

This large cylindrical silver box is decorated with two different Jataka stories in repoussé. A tri-dimensional kinnari (half bird, half woman) crowned the lid surrounded by scenes of  kinnari and kinnara while the Vessantara Jataka is represented around the sides. In the old days, the Burmese would have offered this type of object as a gift for newly married couple as a symbol of fidelity and generosity.