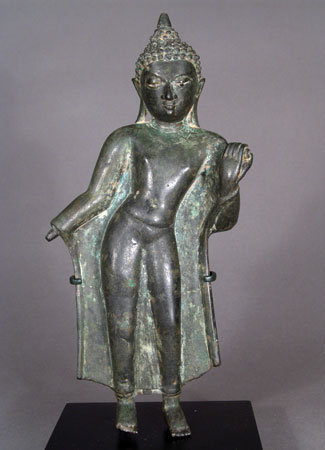 Walking Buddha images in Burma are thought to represent the Buddha's descent from Tavatimsa Heaven where he preached to the gods and his mother after his Enlightenment. They may also reflect the Buddha's wandering lifestyle, as he traveled among cities, monasteries, and the heavens transmitting his knowledge. Walking Buddha’s is not commonly depicted in Burmese art. Images from this period have a slim waist and a soft physiognomy. The face is rounded, the chin is slightly pointed, and the lips are full. Neck rings are evident and the earlobes rest on the Buddha's shoulders (a remnant from the Buddha's life as a prince when he wore heavy earrings). The robes of these early figures are depicted plainly and follow the contours of the body.