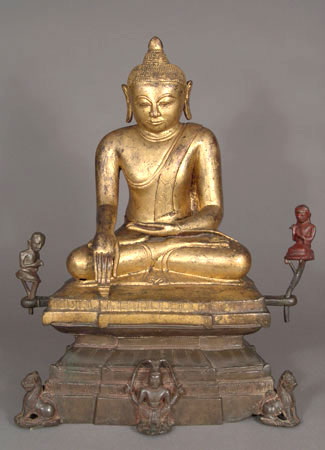 Burma/Myanmar; Dated by inscription to 1628

Gift of WIlliam A. Hensley

This sculpture depicts the Buddha as he calls the Earth to witness his deeds before Mara, the god of evil. After successfully demonstrating that his karma is sufficiently good and defeating Mara, the Buddha reached Enlightenment. The Buddha spent the next forty years teaching and instructing disciples on how to reach nirvana. The combination of images from the enlightenment events and the Buddha's disciples is unusual in Burmese sculpture.

Mr. Hensley was a friend of Muriel Upfill who resided in Burma during the 1930s and early 1940s. This piece was purchased as a birthday present for Mrs. Upfill in the 1930s.